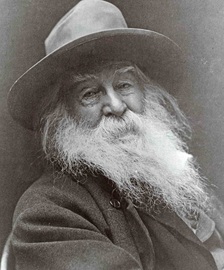 Walt Whitman, circa 1887 (US Library of Congress). O'Reilly first met Whitman through his involvement in a Boston literary club. The two men remained in contact throughout the 1880s. In 1888, Whitman recalled an occasion in which O’Reilly described his experiences as a convict: ‘I shall never forget the first time he spoke to me about his prison life. He was alive with the most vivid indignation – he was a great storm out somewhere, a great sea pushing upon the shore.’
In 1988, U2 released Rattle and Hum. The album contains a song, written by The Edge, called ‘Van Diemen’s Land’. It is a poignant tale of a man ‘who fought for justice and not for gain’ but who was ripped from his family by the British army and transported to what was then a convict colony and is now Tasmania. The sleeve notes of the album show that the song was inspired by O’Reilly’s life and contain the line: ‘Dedicated to John Boyle O'Reilly, a Fenian poet deported from Ireland to Australia because of his poetry. (It wasn't very good . . . !)’. That line, humorous if blunt, would probably be the standard interpretation of O’Reilly’s poetry today. Yet, during the 1870s and 1880s O’Reilly was one of the most famous poets in the United States.

A whole chapter of From the Earth, A Cry, my biography of O'Reilly, is devoted to his poetry so, in this section, we will take a little time to assess O’Reilly’s poetry and literary endeavours not so much from a critical viewpoint but to see how they reflected on the man himself. From the early days of O’Reilly’s life in Boston, he was heavily involved in the city’s literary scene and between 1873 and 1886 he would publish four volumes of poetry; Songs from the Southern Seas and Other Poems (1873); Songs, Legends and Ballads (1878); The Statues in the Block and Other Poems (1881); and In Bohemia (1886). His novel, Moondyne, was serialised in The Pilot from 1878 and published as a book in 1879 while in 1884 he collaborated on the novel All the King’s Men. He even published a well-regarded book on sport in 1888, The Ethics of Boxing and Manly Sport.

Despite his many successes, O’Reilly’s literary fame would prove ephemeral. By the twentieth century nearly all of O’Reilly’s poetry, unlike his writings in The Pilot, was virtually forgotten. Almost none of his poetry appeared in anthologies, although a handful of his poems made it into Kathleen Hoagland’s mammoth 1947 collection One Thousand Years of Irish Poetry. Of the few poems which where anthologised, the most popular was ‘A White Rose’ from In Bohemia: 'The red rose whispers of passion/And the white rose breathes of love/Oh, the red rose is a falcon/And the white rose is a dove'.﻿

Public performances were an integral part of O’Reilly’s literary career and he regularly recited his poetry for admiring audiences; aboard the Hougoumont and the Gazelle; in the Papyrus and St. Botolph Clubs; and in lecture halls across the US. He was a relentless presence on the lecture circuit and he reached huge audiences as a result. Once, O’Reilly travelled to give a talk at Minneapolis where he expressed his disappointment that ‘the audience was good, not large, around 1100 people’. O’Reilly’s literary career had progressed well since his publication of Songs from the Southern Seas. Although he was never a darling of literary critics O’Reilly was popularly and commercially successful. Many of the poems that appeared in his published volumes also appeared in newspapers and poetry magazines. He was very well paid for many of these and this is one factor in O’Reilly’s career that is often overlooked. He published practically every word he wrote and, being a successful businessman, he had a keen awareness of his own value as a literary commodity. After all, by the 1880s, he had an ill wife as well as four children to provide for.

'I shall never forget his delivery of his “In Bohemia” at...the Papyrus Club, when, though not unaware that the creed was fustian, I subscribed unreservedly un­der the spell of the moment to the ardor of his rapturous eloquence....With what passionate faith did he proceed, and when he reached the glowing, re­lentless close, it was impossible not to feel that one was listening to a seer…What a tumult of applause when he sat down. I was stirred to the depths, though dimly aware that I was under a spell.'

- The writer Robert Grant describes his reaction an O'Reilly recitation.

Social Problems and his Poetry 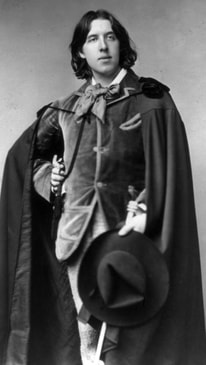 Oscar Wilde photographed during his tour of the United States in 1882 (US Library of Congress). Wilde and O'Reilly had exchanged letters and met in Boston.
This page can give only a very brief overview of the themes that pervaded O'Reilly's poetry. His poems frequently used religion as a theme but this religious poetry was rarely spiritual and more often didactic; advising that mankind should strive to live a Christly life. He feared the repercussions of ethnic and racial divisions in US society and he argued that the social exclusion of ethnic minorities was tantamount to chaining them to a yoke. Yet, as with his journalism, his poetry displayed a clear opposition to women's suffrage. He employed women such as Katherine Conway and Louise Imogen Guiney as journalists and also supported the protection of women's rights in the workplace but he advanced a series of convoluted arguments as to why women should not be allowed to vote. In O’Reilly’s poetry, women were more suited to acting as pillars of support to men in their forging of new worlds and as a rein on men’s more atavistic tendencies. Many of O'Reilly's poems concerned war but he did not revel in war for its own sake and his poems on militaristic themes are not merely tales of audacity and patriotic fervor. Rather, they are a means of showing his reader or listener that wars are sometimes worth fighting, especially those wars in defiance of oppression or those that result in a new birth of freedom.

The difference between O’Reilly the poet and O’Reilly the editor was often slight but he was sometimes more bitterly critical of society in his poems, especially in the later volumes, The Statues in the Block and In Bohemia. In these works there was a focus in his writing on social inequality. There were no shades of grey but a Manichean distinction between light and darkness, between right and wrong. It was these energetic verses that endeared him to many of his contemporaries. Writing in 1886 for The Irish Monthly, a magazine published by the Jesuits, the poet and critic Daniel Connolly declared that ‘In all his literary work the quality of forceful expression is paramount. But with the expression there always is vigorous thought; the writer never speaks unless he has something to say.’

There is a thematic link in these political poems to Percy Bysshe Shelley’s (he was a favourite of O’Reilly’s) ‘England in 1819’ and that poem’s attack on the ‘Rulers who neither see, nor feel, nor know/But leech-like to their fainting country cling’. In O’Reilly’s ‘The City Streets’, the narrator journeys through a city and contrasts the lives of the rich and poor. Geographically, the two groups are only metres apart but socially they inhabit parallel universes. O’Reilly’s poetry was one medium for his humanitarianism. Such verses highlight how much of his verse was designed to illustrate virtue, expose the hypocrisy of the powerful, and to stress his belief that the divisions in humanity engendered by imperialism, race, creed and money were as stupid as they were wicked. That others should be entitled to dignity is a profound yet uncomplicated message. O’Reilly took it upon himself to deliver it and made his name as a writer in so doing.

'I am sick of the showy seeming

Of a life that is half a lie;

Of the faces lined with scheming

In the throng that hurries by.

From the sleepless thoughts' endeavour,

I would go where the children play;

For a dreamer lives forever,

And a thinker dies in a day.'

- A verse from O'Reilly's 'The Cry of the Dreamer'