The Penal Colony of Western Australia

A contemporary sketch of Fremantle Prison (State Library of New South Wales). O'Reilly arrived at the Western Australian town of Fremantle in January 1868, although he would spend only a few weeks at the prison. He was then detailed to work in a road-building party near the town of Bunbury.
O’Reilly spent time in prisons such as Pentonv﻿﻿ille, Millbank, and Dartmoor, among others. He attempted to escape from Dartmoor but was recaptured before he was eventually transported from England. By 1867 the process of transporting convicts from Britain and Ireland to Australia was almost at its end but O’Reilly found himself among a group of Fenians aboard a ship travelling to what was then called the Penal Colony of Western Australia. That ship, which left England in October 1867, was the Hougoumont and it would prove to be the last vessel ever to transport convicts to the southern continent.

To this day he remains a legendary figure in Western Australian history, almost entirely because of his dramatic escape from the colony. He was stationed in a convict depot near a coastal town called Bunbury, about one hundred miles south of the city of Perth. Most convicts in the colony were engaged in some form of land improvement and O’Reilly was part of a small group striving to build a road through the forest outside Bunbury.

It was hard work but, in a chilling testimony to the brutality of the conditions within the English prison system, O’Reilly and his fellow Fenian convicts found their new life far preferable to their previous incarcerations in institutions such as Dartmoor. O’Reilly’s life was further improved by his good relationship with the warden in charge of his depot, Henry Woodman. This warden used O’Reilly as his assistant and the Fenian was regularly employed in ferrying paperwork from Woodman’s office to Bunbury. Yet O’Reilly still yearned to break free and, around September 1868, he was given his first glimpse of a potential opportunity when he crossed paths with a local Irish-born priest, Fr. Patrick McCabe. To this priest O’Reilly confessed his determination to escape by absconding into the Australian wilderness. McCabe’s response was blunt: ‘It is an excellent way to commit suicide’.

‘A rumor went through the prison…However it came is a mystery, but there did come a rumor to the prison, even to the dark cells, of a ship sailing for Australia! Australia! the ship! Another chance for the old dreams; and the wild thought was wilder than ever, and not half so stealthy.’

- O'Reilly Describing the moment he realised that he was to be transported to Australia, 1867 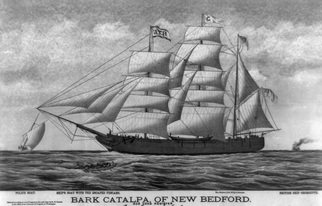 The events of John Boyle O'Reilly's escape, in 1869, from the Penal Colony of Western Australia are often confused with the famed Catalpa rescue of 1876. The Catalpa was an American Whaling ship which Clan na Gael employed to rescue six Fenian prisoners from Western Australia. John Devoy masterminded the expedition, although O'Reilly played an important role early in its planning (picture from the US Library of Congress).
﻿McCabe's analysis was accurate. Any potential escapee faced a choice between escaping into the sea or the unforgiving, unmapped, and mostly deserted Australian interior. Even so, it is estimated that around one third of the, almost ten thousand, convicts sent to Western Australia made escape attempts despite a range of punishments that included one hundred strokes of the lash; six months in solitary confinement on a diet of bread and water; and two years working in irons. Practically all of the escapees were apprehended by the authorities but O’Reilly, aided by McCabe and a local farmer named James Maguire, would prove a stunning exception to this rule.

On the night of 17 February 1869 O’Reilly slipped away from his convict camp to meet with Maguire at a pre-arranged rendezvous point. The farmer led O’Reilly to the Collie River from where they used a rowing boat to sail, unnoticed, through the port of Bunbury and up the coast to a deserted beach. For the next two weeks the countryside around Bunbury was convulsed by a huge manhunt as the police utilised their vast resources to try and apprehend the escapee. O’Reilly remained hidden in the dunes, supplied with food by a local family, until he was picked up by an American whaling-ship, the Gazelle.

He spent the next eight months on various ships. He was nearly killed in one whale hunt, and almost recaptured by British forces on another occasion. The voyage was a profoundly important event in O'Reilly's life. Not only was he rescued from a life of convict labour but he made friendships aboard the vessel that would be of great importance to later events such as the Catalpa rescue. Finally, in November 1869, the ‘self-amnestied’ convict disembarked at the city of Philadelphia.

'Home, friends, all that I loved in the world were there, almost beside me, - there, ‘under the sun’ and I, for loving them, a hunted, outlawed fugitive, an escaped convict, was sailing away from all I treasured, - perhaps, forever.'

- O'Reilly, an escaped convict, describes the moment he sees the coast of Ireland for what proves to be the last time, 1869