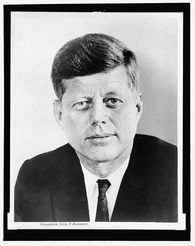 President John F. Kennedy (US Library of Congress). In his speech to the Irish parliament during 1963 Kennedy spoke about O'Reilly and his poetry.
In June 1963 President of the United States, John F. Kennedy, visited Ireland and addressed a joint session of the Irish parliament. In his speech he spoke of the historical links between the United States and Ireland, invoking the names of Thomas Francis Meagher, James Hoban, Daniel O’Connell, John Barry, and Charles Stewart Parnell as proof of this shared heritage. But Ireland was only a starting point for Kennedy’s oratory and he then described the common bonds of humanity which transcended race, politics, religion and geography: ‘And no nation, large or small, can be indifferent to the fate of others, near or far. Modern economics, weaponry and communications have made us all realise more than ever that we are one human family and this one planet is our home.’

To underline his point the US President quoted a once-famous Irish poet: “The world is large,” wrote John Boyle O’Reilly. “The world is large when its weary leagues two loving hearts divide. But the world is small when your enemy is loose on the other side.” Kennedy continued: 'The world is even smaller today, though the enemy of John Boyle O’Reilly is no longer a hostile power…The supreme reality of our time is our indivisibility as children of God and our common vulnerability on this planet.' O’Reilly was a particularly apt choice with which to explore such ideas. For twenty years, from 1871 to 1890, he had been one of the most famous and respected newspapers editors in the United States; a writer and a civil rights activist whose popularity transcended race, religion and nationality.

'For all time to come, the freedom and purity of the press are the test of national virtue and independence. No writer for the press, however humble, is free from the burden of keeping his purpose high and his integrity white. The dignity of communities is largely intrusted to our keeping; and while we sway in the struggle or relax in the rest-hour, we must let no buzzards roost on the public shield in our charge.'

The Pilot: an Irish-American Newspaper 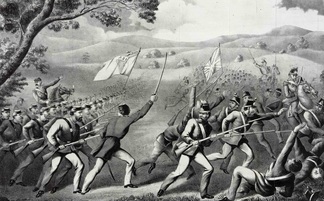 A contemporary, albeit romanticised, image of the Battle of Ridgeway, 1866 (US Library of Congress). The battle took place during what was termed the Fenian 'invasion' of Canada. John Boyle O'Reilly took part in a similar attack on Canada in 1870, although he would, soon after, leave the Brotherhood.
O'Reilly had edited The Pilot, a Boston based newspaper which was one of the leading Irish-American papers in the United States. Owned by Patrick Donahoe, a Cavan-born businessman, The Pilot played an important role for immigrants, linking their old society to their new one. The paper, as did other immigrant papers, sought to maintain the self-esteem of the immigrants and offered advice on the political, social, and economic environment that surrounded the new arrivals. The paper provided a sense of community and sanctuary to Irish immigrants, a service that was vitally important in the nineteenth century and especially in the face of the anti-immigrant and anti-Catholic nativism of the 1840s and 1850s. This nativism was most infamously encapsulated in the form of the ‘Know Nothings’; a political grouping that often resorted to violence against Catholic immigrants.

By 1870, the paper was flourishing and O'Reilly, famous as a result of his escape from Australia, was hired by Donahoe, who had a history of employing young and talented journalists. O'Reilly's first assignment was to cover the 1870 Fenian raid into Canada; one of a series of attacks made by the Brotherhood after the American Civil War. Soon after, O'Reilly became editor of the paper and, for the next twenty years, he would devote his energies to a wide variety of causes from Irish independence to civil rights for the black population of the United States. O'Reilly similarly offered his support to native-Americans, and was an opponent of anti-Semitism. Also, following the prolonged financial turmoil caused by the financial crisis of 1873, O'Reilly became an outspoken supporter of worker's rights and movements such as the Knights of Labor.

'Well, paternalism is better than intolerable and irresponsible tyranny and there seems to be no other alternative. Paternalism supported by State power is better than Monopoly upheld by the private mercenaries whom Pinkerton lets out to the service of the money kings. Anything is better than the rapacity of the insolent highway robbers who control the total supply of a prime necessary of life, anything even anarchy.'

- O'Reilly criticising the concentration of economic power in the hands of monopolists, 1888